Over the years, Microsoft has made incremental but very slight changes to the primary command-line terminal in Windows, the Command Prompt. Initially developed for Windows NT, the Command Prompt or cmd.exe has been around for a very long time and has been the favorite command-line interface for users, despite the introduction of an alternative CLI by Microsoft; the Windows PowerShell.

Introduced in 2009, Windows PowerShell 2.0 became a very integral part of Windows 7 and Windows Server 2008 R2.  PowerShell is a task automation and configuration management framework by Windows and consists of a command shell along with an associated scripting language. Built on the .NET framework, the Windows PowerShell is a Windows command-line shell designed especially for system administrators.

However, the PowerShell never really took off as the primary CLI even though Microsoft tried to pitch it as the perfect replacement, even replacing the CMD option from the right-click menu with PowerShell (here is how you can get it back by using our guide).

Since the past few years, Microsoft has been working on a completely new CLI for Windows, called the Windows Terminal. Announced to the world last year, the Windows Terminal is a new, modern, fast, efficient, powerful, and productive terminal application for users of command-line tools and shells like Command Prompt, PowerShell, and WSL.

Microsoft also released a pretty swanky video to introduce it in all its glory,

There are a ton of things that make Windows Terminal a much-anticipated release. We have listed down a few of them below,

So, the question is, how can you get the latest and greatest Console for Windows? Well, for now, there are two ways you can do it.

You can simply go to the Windows Store and download the Windows Terminal like any other app. Here is how you can do it,

Once it is installed, you can simply search for it through Windows Search and typing Windows Terminal by pressing the Start button and then open it. When you open it, the default console will be Power Shell but you can simply click on the little down arrow, as shown in the screenshot below, and change it to any other terminal type. However, do keep in mind that this is only a Preview version for now. 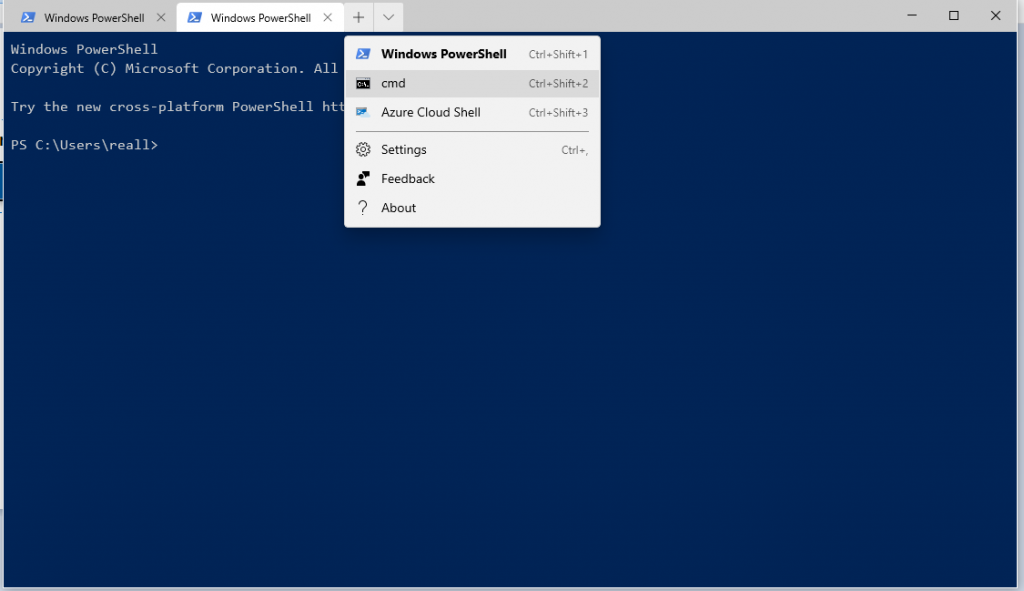 Windows Terminal is also available in open-source form on the code repository, GitHub. You can access it by clicking on this link. There are several ways you can download and install it,

The complete plan for the Windows Terminal v1.0 has been detailed on the roadmap over on GitHub. The whole project is engineered and delivered as a set of 4-week milestones and is on track to deliver Windows Terminal v1.0 by Spring 2020. You can also contribute and help with the project but be sure to read and follow the Contributor’s Guide before starting work on a feature or a fix to make sure that there is no wasted or duplicated effort.