Windows is a graphical operating system, developed and distributed by Microsoft, a multinational technology giant. A general terms, Microsoft Windows is used to collectively describe several generations of products that fall under the Windows umbrella. However, the most popular version of Windows Microsoft sells for Personal Computers (PCs), dominating with around 90% share of the desktop operating system market.

Microsoft's premier product, Windows, was first introduced in 1985 as a graphical operating system shell for MS-DOS to attract the growing interest in GUIs (Graphical User Interfaces). While Microsoft's prime focus has been toward PCs, they have also introduced a number of other versions to target specific products. One such example is Windows Server (IIS), an operating system for web servers commanding roughly ~30% of the market.

Windows Phone, although technically not a branch of Windows, still fell under the Windows umbrella. It was designed to compete with Google's Android and Apple's iOS, but due to falling sales and decreasing interest, Microsoft decided to shutter the program in 2017.

Windows started its life in November 1985 as Windows 1.0 — an extended version of MS-DOS. This was followed by Windows 2.0 two years later, which came with improvements to the UI as well as memory management. It wasn't until Windows 2.03 that Microsoft introduced the now-ubiquitous overlapping windows, as opposed to the tiled Windows in previous versions of the OS. But, it wasn't until Windows 95 came out in 1995 that Microsoft saw real commercial success; a glimpse of the things to come.

Here are some other major versions of Windows, listed in order:

Windows 10 was a major shift in Microsoft's pricing model, by giving it away as a free upgrade to most PC users. The current and latest version of the operating system, Windows 10 is the first version of Windows which will receive ongoing feature updates. It introduced a number of new features from universal apps, touch-optimized features, an updated start menu, a virtual desktop system, Microsoft Edge web browser, and a lot more. 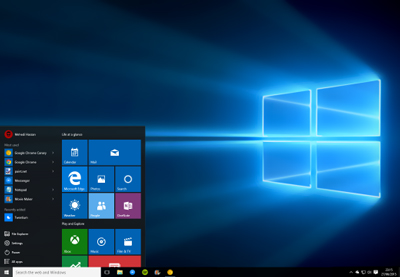 Browse Other Files Associated With Windows