Over the years, the way that we install software on our computers has gone through numerous iterations. At the start, we had to rely on Floppy disks and, later on, CDs which came with installation wizards to install softwares on our PCs.

As internet speeds improved, we started to get options to download softwares as well, directly from the internet, without having to buy a physical CD. This was the first major shift in how software is distributed around the world – for the first time, you didn’t need a physical transfer, you could buy and download any software right from your home, in a few minutes. Later on, smartphones, and specifically the iPhone, further evolved this idea through the introduction of App Stores which made the process even easier by providing one trustworthy, central hub for all your application needs.

Microsoft also has its very own Windows Store based on the same idea – a central hub for all your Windows applications. It was introduced in 2012 and has improved considerably, now also being the source of updates for many Windows applications. However, it never really took off the way Microsoft intended it to. Instead, people still relied on other software repositories (package manager) which allowed them to quickly download software from the terminal. Package managers like Chocolatey, Ninite, Scoop, and more.

Now, Microsoft has finally decided to release its very own Package Manager called winget which is a command-line package manager that allows you to quickly download an application from a wide range of Windows applications.

Primarily targeted to developers, the winget command-line tool enables developers to discover, install, upgrade, remove and configure applications on Windows 10 computers. This tool is the client interface to the Windows Package Manager service.

Note: The winget tool is currently a preview, so not all planned functionality is available at this time.

How to install winget?

Currently, this tool is available as a developer preview and won’t be available for everyone. However, there are several ways you can install and use it,

We have already covered the first two options – you just have to participate in the program(s) and you should automatically get the winget tool. To check if you have the tool, just open the Windows Command Prompt and type winget and press Enter.

If it shows this error, you don’t have the winget tool right now,

‘winget’ is not recognized as an internal or external command, operable program or batch file.

If you don’t want to participate in the Windows Update programs and still want to get the winget tool right now, you can also manually install it as Microsoft has created a repository on GitHub along with a Releases page.

Here is how you can install it,

Open the Windows Command Prompt and type winget and you should see the following output, as shown in the screenshot below. If you see it, it means that the package has been installed and you can start using it. 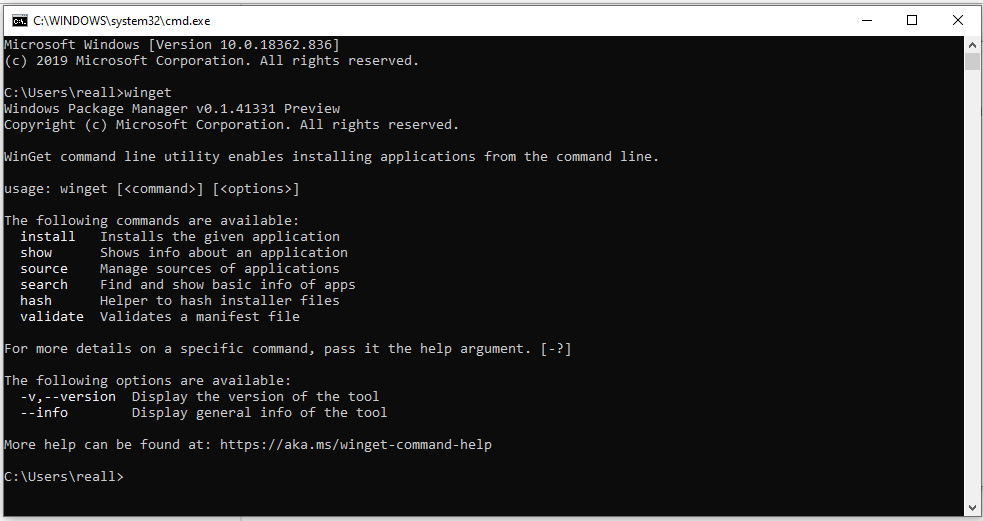 Build Your Own Client

You can also build the client yourself if you are interested in doing that. According to Microsoft’s documentation,  “While the client should be perfectly functional, we are not ready to provide full support for clients running outside of the official distribution mechanisms yet”.

They currently only build using the solution; command-line methods of building a VS solution should work as well.